When asked to pen a few lines about Honey Hill and what it meant to me I could not think of what to write other than it is beautiful and it would be a crime to desecrate it with the proposed, unneeded and unwanted sewage works… but everyone knows that. Everyone, that is, apart from the faceless ones determined to railroad it through.
On consideration, however I realise that Honey Hill has been known to me for many years and, in the course of horse riding, walking, jogging and cycling, plays a significant part in my life and I have many fond memories of it.
I moved to Fen Ditton in 1986 and first set eyes on Honey Hill on Boxing Day of that year when I was taken there by a well-known local character called “Barry the Horse”, (sadly no longer with us).
We stood near the Pink House and watched the local hunt gallop past in full cry and, whatever your views on hunting, seeing horses and hounds at full gallop in close proximity is a sight that cannot fail to stir the blood.
Since that day I have been a regular visitor to the area, even at one time, keeping a horse in the now disused, but rather pretty, hedged meadow on the left as you approach the Pink House from Fen Ditton.
The Pink House, I am assuming, was a crossing keeper’s cottage when the Honey Hill to Snouts Corner track was a vehicular road. There are the overgrown remains of another such crossing keepers cottage at the railway’s junction with another former road further towards Lode.
Most of my memories of Honey Hill area are equine related and I recall riding towards Snouts Corner when we saw in the distance a Harrier Jump jet rise into the sky in a vertical take-off, (which I knew they could do), and then, spectacularly, fly backwards (which I didn’t).
For several years I kept two horses at some old farm stables, (now Francis Court), in High Ditch Road, Fen Ditton and our daily hack out would be towards Honey Hill either turning right onto the railway track at the Pink House or carrying on towards Horningsea.
One frequently bumps into other horse riders or walkers also enjoying the peaceful haven Honey Hill offers together with frequent sightings of wildlife including foxes and deer all within sight of Cambridge’s urban sprawl.
Another well known character frequently encountered around Honey Hill until fairly recently was “cool hand luke”, a kindly eccentric who rode a stocky dun horse and dressed as an american civil war confederate soldier complete with stetson, six gun and sabre. His horse could be frequently be seen tethered outside various pubs in Fen Ditton, Horningsea and Quy!
The proposed sewage works is not needed -it is merely being relocated to facilitate building tract housing at Milton. The proposed desecration of this area, in the green belt and in defiance of all the mores of planning, conservation, ecology and traffic, is a crime, plain and simple.
It will deprive not only local people of a rural haven in a rapidly urbanising area but adversely impact the lives of the many people who will come to live in the area in the many years to come. Years which we may not live to see.
Once Honey Hill is gone, it will be gone forever.
Nick Dakin

Gayton farm is a working farm and campsite in the village of Horningsea, on the edge of Cambridge with far reaching views over acres of open countryside. The proposed sewage works site on Honey Hill is adjacent to their farming land, and the initial consultation documents from Anglian Water shows that the trenched sewage pipeline that will connect with Waterbeach New town goes alongside the campsite.

Carolyn and I have farmed at Gayton Farm for 8 years. In this time we have diversified our small farm with a campsite and a couple of glamping units. People who stay with us enjoy the fact they are so close to the centre of Cambridge but they are in such a rural peaceful setting. With the potential construction of the sewage works this will dramatically change. The size of structure planned will become completely dominating in this rural area in untouched prime farmland. This massively industrial structure, alien to the surrounding landscape will be clearly visible from our campsite. This is bound to affect our reviews and booking numbers. This even without the potential smell.

From a farming perspective, the link pipe to Waterbeach will cause massive disruption. The work will dissect our farm in half, not only causing difficulties in working the land but also accessing it. It will also cause huge disturbance to the wildlife that live on the farm.

Farmland is a valuable resource and it is disgusting that so much prime farmland is to be lost forever, especially in an area supposedly protected by being in the greenbelt. 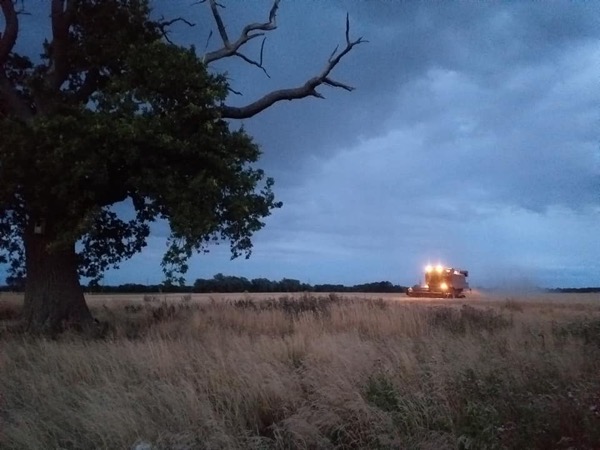