Honey Hill is surrounded by sites of cultural and historical interest, including a treasure trove of archaeological heritage from the Neolithic through to Anglo-Saxon eras.  A rare Early Bronze Age Pond Barrow and one of the largest Iron Age settlements in the region lie to the south and there is evidence of a Bronze Age Round Barrow to the north. Important Roman pottery production sites have been discovered to the north-west and south-east.

We should not forget that the higher ground associated with Honey Hill was of real significance to our ancestors who lived here.  Burial mounds would stand out from the surrounding fenland, and it must have felt that the dead were occupying a liminal space on the very edge of the known world – wilderness lay beyond.  It is not surprising that John Speed made a point of marking out this topography in his map of 1610 (see illustration). Strangely, Honey Hill was turned into a mountain range in Petrus Schenk’s map (c 1680), but this reinforces the fact that height – and Honey Hill – mattered!  A century later, a drover’s way skirted Honey Hill, providing villagers with access to common land that had emerged from the drained fens.  Wilderness had been transformed into a source of sustenance for the villages of Fen Ditton, Horningsea and Stow-cum-Quy. 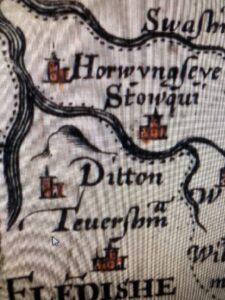 This is the Eastern Fen Edge landscape that receives special attention from the 2002 Cambridge Green Belt Study, which highlights the historic situation of the small villages lying on slightly raised ground, close to water and where the land was easily cultivated.  “The areas retaining the strongest rural character play the greatest role in contributing to the special quality of Cambridge as a city set in a rural landscape setting,” the report states. “It is on these areas of slightly raised ground, close to water and where the chalk land was easily cultivated, that villages first established. The situation of the small villages in this rural setting is an important part of the setting and special character of East Cambridge. … This is where the two areas of greatest contrast lie closest to the urban area. It is important that these contrasts in landform are not masked by development. Development should not, in particular, be allowed on the chalk hills or on the fens where it is uncharacteristic and would adversely affect the historical relationship between built development and landform.”

Many thanks to Tristram Riley-Smith (Fen Ditton resident and Save Honey Hill Campaigner) for this small insight to the history of Honey Hill.