As reported in the Cambridge Independent1 the joint Council Leadership is promoting the new Greater Cambridge Local Plan First Proposals as having green credentials and an emphasis on protecting the Green Belt that surrounds Cambridge and the historical villages within it. The villages themselves and Green Belt designation has been identified in multiple Green Belt Studies commissioned by the joint Councils over the years as being essential to maintaining the character of Cambridge City. As specified by Lead Member for Planning on South Cambridgeshire District Council, Cllr. Hawkins2:

“The Green Belt is a vital tool for protecting the unique setting of Cambridge City as well as protecting our villages from urban sprawl whilst maintaining their character and providing green corridors for bio diversity…It is only possible to make changes to the Green Belt if there is very strong evidence to justify it….”

Many of the villages in the Green Belt and the historical listed buildings within them, have an additional layer of protection in being designated Conservation Areas. Planning protection of Conservation Areas extends beyond the specific boundary and includes adjacent land where a proposed development would have a detrimental impact on the setting, character and appearance of the Conservation Area.
Despite the declarations of our Council Leadership there is a clear omission in the Greater Cambridge Local Plan First Proposals.

The Local Plan nor the supporting Strategic Environmental Assessment address the direct consequences of the housing proposals for North East Cambridge, namely the relocation of Cambridge Waste Water Treatment Plant (CWWTP) into the Cambridge Green Belt.

The proposed site for the relocation is in the Honey Hill area, within just 1.5km of the existing plant and 0.5km of three conservation areas: Fen Ditton, Baits Bite Lock and Horningsea. The proposed plant will be visible from all these areas which include multiple footpaths, national trails and other high quality public amenity land. This location jeopardises the National Trust’s Wicken Fen Vision, the area being the intended southern public access for the extended Fen Area, now to be within the odour zone of the proposed relocated CWWTP3.

All conversations or implied meaning in reports that the relocation of CWWTP is to do with anything other than the Cambridge City and South Cambridge District joint Councils desire to build houses on the existing site and adjacent land are red herrings or smoke screens.

There has been no reference to any requirement to increase capacity in Anglian Water’s public funding or planning application to date. Indeed, it is due to there being ‘no operational need to relocate’ that Anglian Water are legally unable to raise finance or charge its customers to cover the costs of building a replacement facility and applied instead for £227 million of public money to do so456.

In 2016, £21 million was invested in the existing plant and was stated as having future-proofed the plant ‘for decades to come’. The Environmental Journal heralded the upgrade as ‘securing its standing as the eastern region’s green energy generating plant’78.

Anglian Water in their letter to the Secretary of State seeking a Development Consent Order (DCO) state the operating capacity of the existing site has a population equivalent of 548,000 and that the proposed relocated site will operate at the same capacity9.

The capacity of the integrated CWWTP has a population equivalent of 548,000……..
The CWWTPR will operate at the same capacity as the existing CWWTP.

Current plans to extend the CWWTP catchment area for waste water to include Waterbeach New Town, in the absence of the relocation, will be absorbed by the existing site creating, in Anglian Waters’ words, ‘significant embodied carbon reductions and operational efficiency.’

The increased employment opportunities arising out of the proposed plans for North East Cambridge (NEC/NECAAP) are also not attributable to the relocation of CWWTP to the Green Belt. The figure of 15,000 jobs specified in the Greater Cambridge Local Plan First Proposals are the same as those identified in the Issues and Options Consultation (2014) informing the existing South Cambridgeshire District Council (SCDC) Local Plan (2018)10 without the requirement of the CWWTP relocation. As the market requires, new office buildings and R&D facilities in the area within the Cambridge Science Park, St John’s Innovation Centre and Cambridge Business Park will continue as at present.

The implications of the relocation of CWWTP for the benefit of housing development on carbon expenditure is huge, including embedded carbon and carbon emissions.

Carbon expenditure in the relocation, to fulfil the Councils’ desire to build houses on the existing site, should be calculated and off set against any carbon efficiencies declared to be gained in a new plant and assessed against the Local Plan policy on Carbon Expenditure/Omissions.

Carbon expenditure will include: the decommissioning of a fully operational and future-proofed plant within just 1.5km of the existing one; the decontamination of land to make it fit for housing; the construction of an entirely new plant in undeveloped land; extensive tunnelling to carry waste that feeds into the existing plant across the river, up the hill to the new one and back again to the River Cam; and construction traffic over a four year period.

There is a regulatory requirement that the Strategic Environmental Assessment (SEA) used to inform the direction of the Local Plan must set out the likely significant effects of implementing the plan, that authorities and the public are given an effective opportunity to express their opinion and that the report includes information that may be required to do so11

The omission of the relocation of CWWTP as a direct consequence of the Councils’ housing development plans for North East Cambridge in the SEA does not enable our elected Council representatives or the residents of Cambridge City or South Cambridge District to effectively and objectively assess the effects of the Local Plan on the Green Belt or other related Local Plan policies.

Notably, without inclusion of the proposed CWWTP relocation site in the Local Plan, the Councils are not fulfilling regulatory requirements and the planning proposals for North East Cambridge cannot be measured on a par with other development proposals in the Local Plan.

Anglian Water are pursuing a national planning pathway (Development Consent Order, DCO) for the relocation; timing of the Greater Cambridge Local Plan strategy accounts for this.

If the DCO planning process is put forward by the joint Councils as a reason not to include the effects the housing proposals for North East Cambridge will have on the Green Belt, and it is not to be assessed against the Local Plan policies on a par with other proposed developments, then the proposals for North East Cambridge should be removed from the Local Plan until such time as they can.

From Wednesday 25th August edition of the Cambridge Independent.

Here is the official response from the Save Honey Hill group to the Phase Two consultation of the Cambridge Waste Water Treatment Plant Relocation proposal (CWWTPR). The response has been sent to Anglian Water and they have confirmed receipt.

The consultation ends tomorrow, but it’s not too late to add feedback. Even if you have submitted a response using Anglian Water’s form, they will still accept emails and letters. Anglian Water have confirmed these will be counted and accepted. Their interactive map will also be accepting comments and “likes” up until the end of tomorrow. It only takes a few minutes to go like comments you agree with. It only takes a few minutes more to enter comments about various parts of the proposal.

In the Cambridge Independent today:

If you haven’t yet done the consultation then here are some suggestions from the Save Honey Hill campaign. 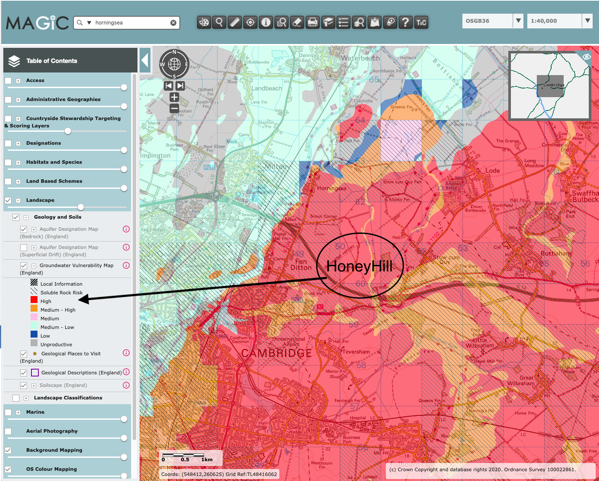 In the Cambridge Waste Water Treatment Plant Relocation (CWWTPR) phase 2 consultation, Anglian Water have put many graphics of how they envisage their “iron age fort” sewage works will look and be located. However, they have not put a straightforward map of just how large the plant will be in comparison with the villages of Horningsea and Fen Ditton.

Here is a simple map, constructed using Anglian Water’s own maps for reference and Google Maps for the locations of roads and villages.

The existing plant is also shown, using the information given in the CWWTPR Phase one documents. 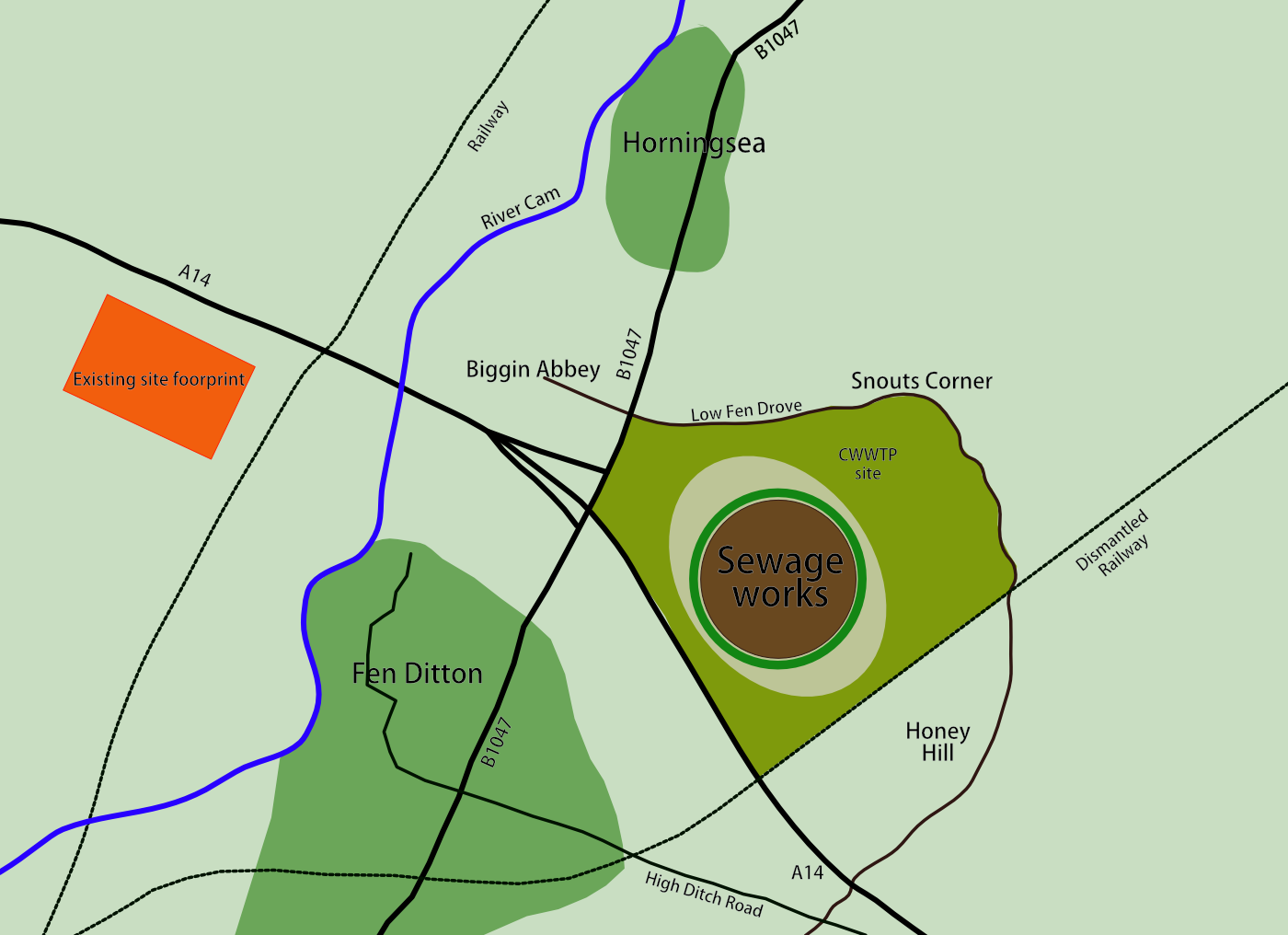